How to Save Battery on Android

The battery life of a smartphone is not as smart as it’s features are. So, you get some and you charge some. No batteries last forever and some android phones last very short in terms of battery. You can’t increase your android battery life to 2x or 3x comparing to as it is now but there are a few tricks and if you use them you will know how to save battery on android very easily.

The Nokia era of batteries are long gone now. Before the rise of smartphones on every hand, nokia phones were the most popular ones with battery life longer than many short lived species. Actually those phones used to last 2-3 days with a single charge. You may also find memes about those. Some of them say, the phone lasts more than 24 hours after first warning of low battery. However, to some of you, this might seem a fairytale but trust me, it was for real. I have used myself a 3310 with a battery life of hulk. As soon as the smartphones like android, windows and iOS started growing up on the market, the Symbian phones was the fallen one.

Okay, let’s get out of the history part and discuss something that makes actual sense. I often see blog posts or request for tips and tricks on how to save battery on android and it’s a hot and trending topic too. It takes no huge effort, just some precautions. Before applying techniques on how to save battery on android, you need to know which apps eats up most of your battery. To check this, you need to see your battery usage. Go to your settings and find your battery usage which should look something like this: 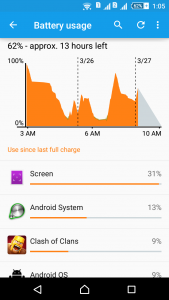 You can see most of your battery is used by the screen, so let’s try and do something about the screen.

It might seem very fancy to use a live wallpaper, to some people it might be some sort of show off how nice phone they have but by doing this, you are killing your battery. You don’t need your wallpaper to be an animation or even a video. What’s the point in that? Use a general wallpaper and also try to use a wallpaper that has black color in it. It will use less battery life.

This daydream thing may be in different names in different phone, but it is the thing that flashes around when your phone is on charge. It shows latest pictures on your screen. You don’t need to have that feature turned on. Nobody looks at their smartphone always when they are being charged, isn’t it? So, for sake of saving battery on android let’s not do that.

You might like the auto brightness turned on so that you don’t need to change the adaptiveness each time you go to a darker place form lighter one and vice versa but auto brightness is not that good for your phone’s battery. When you set brightness to auto, it actually gives you a lot more brightness than you need. Thanks to some new features on newer devices, now along with auto brightness you also get a meter of setting the minimum brightness, if you are blessed with this option on your android, use the minimal.

A smartphone comes with loads of smart features which you don’t need most of the times. Recommendation is, only use features you really need. Such as, you don’t need to turn on your GPS, Bluetooth, NFC, Mobile Data and even Wi-Fi all the time. You might get mad about the fact Wi-Fi but think, you only need it when you are home, or at your mates’ or somewhere you have access to a network. So, you can turn it off unless you start using it. When you are at home, it’s totally fine. You have access to your Wi-Fi and you can also charge your phone whenever you want but you won’t have a change to charge it when you go out for work. So, why waste it for no reason? Mobile data is a monster in case of battery use. If you haven’t checked yet, you can check your battery use during wireless network and compare it to mobile data. You will find at least 1.5x to 2x more battery usage during this. Use mobile data only when you do not have any wireless connection nearby. Other features like GPS, Bluetooth or NFC, you can turn them off for save battery on android, right? It’s worth it. I am not saying not to use it, but only turn it on when you use those features. Like mobile data, gps also eats up a whole lot of battery. 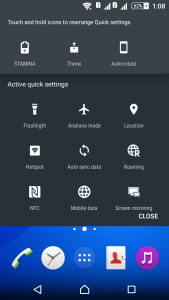 All the big names in android phones have their own personalized battery saving built in app so that it helps save some of your battery. Use all the features you need there. 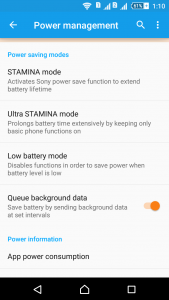 Using phone during charge is very harmful for your phone’s battery. It causes long term damage to it. When you use your phone, the battery is used and if at the same time the battery is used for charging, which is completely the opposite direction, that’s going be harmful. If something is really needed to be done, discharge your phone and then use it, that will do just fine. Also, do not charge it very often, try to charge only after the battery is down to 30% or less. Your phone will charge faster and you will also save battery on android.

Enabling the auto syncing on your android means you are running the apps on the background all the time. Even when you turn off the screen. You do not need to be online for 24/7. Many say, auto sync is a trap for your battery to die fast. If you want to save battery on android, avoid auto sync process.

It’s just a phone, you don’t need to use it all the times, play games or use facebook in it. After all, it is a small device and it might not take all you put on. So, you can spend some times with your television or laptops and use a bit less of your phone in order to save battery.

In order to save battery on your android, you have to apply as much as you can of the above. Yes, sometimes it’s hard to do all these so my advice will be to apply as much as you can. There are people who needs to be online even on the go, so for them, maintaining these would be very difficult. Without applying these, you just can complain how to save battery on android every now and then.